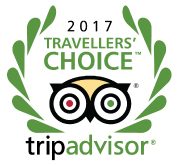 Navini Island Resort is the proud recipient of two TripAdvisor awards for 2017; a Travellers’ Choice in Fiji for service, as well as a Certificate of Excellence.

The world’s largest travel site named Navini in its latest Travellers’ Choice Awards, which is an extensive program based on the reviews and opinions from tourists across the globe.

This is the highest honour TripAdvisor can give, as it means Navini is in the top 1% of hotels based on the opinions of millions of travellers.

To our guests who have helped us achieve this award, vinaka vakalevu from us all on Navini.